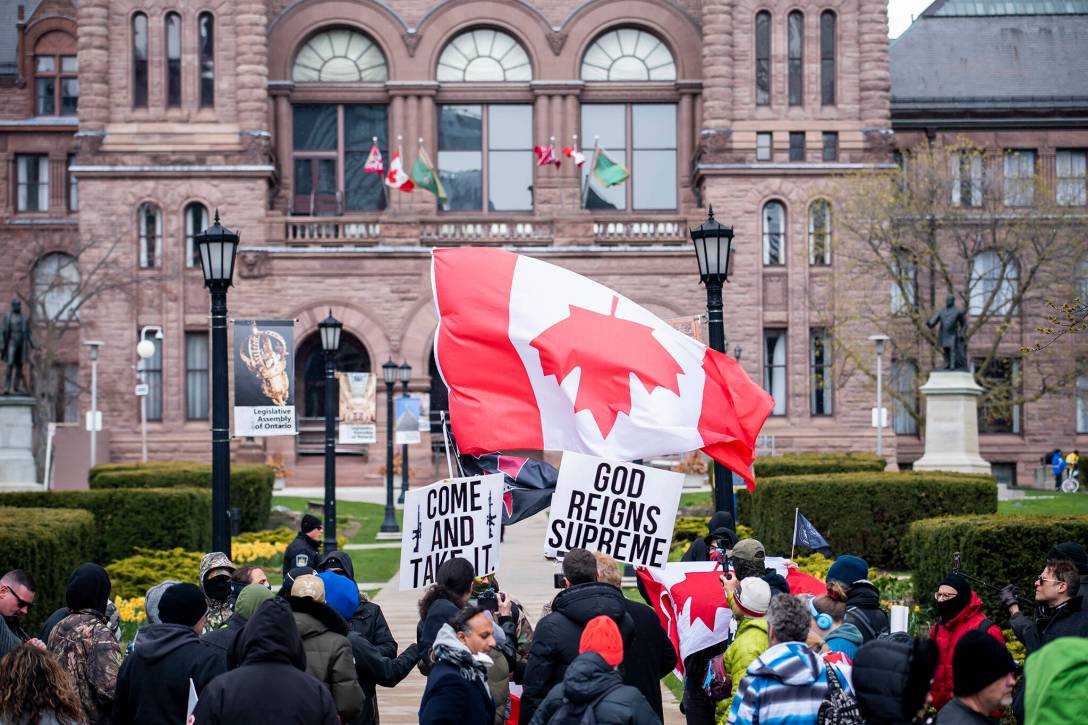 Our series on the developments in the far right camp over the course of the COVID-19 Pandemic. The series tracks the actions of several organizations as they build an alt-right coalition in defiance of public health emergency measures.

THE LINE Canada organizes weekly protests against the COVID-19 lockdowns in Toronto’s Dundas Square. THE LINE urges people to struggle under its logo, which echoes right wing movements in the British Empire.

Why do major polls still include the People’s Party of Canada when it polls even lower than independent candidates?

Signs of the Times

Anti-mask protests began in Canada on July 18th, 2020. The slogans and symbols of THE LINE were there, in major cities from Halifax to Vancouver.

How The Line assembles an audience among existing right wing protest movements.

Before you can sell merch to people, you have to reach the people.

The Line reveals little glimpses of their business side.

Representatives of The Line pepper their speeches with invocations of Common Law, but their interpretation of it is very uncommon.

Your Body Is A Vessel

Do you love being free? Do you want to start your own country? Come, let’s peek down the rabbithole and gawp at the Freeman-in-the-land.

How an apocalyptic sect that has sacrificed children for its beliefs became the conscience of the anti-lockdown movement.

I love election season. The way it brings out everyone’s political derangements and kinky pathology. This is manna from heaven.

Held in the wake of Trump’s 2020 debacle, the 44th Canadian Election is going to be subject to paranoid speculation and rightwing fantasies. The country’s major broadcaster is fuelling the fire.

Battling the Boy from Beauce

Anti-vaxx protesters have forced Trudeau off the campaign trail with harassment and death threats. One party stands to profit the most from these obscene and extreme demonstrations.

In Canada’s status quo election the Tories suffered the greatest disappointment. Their campaign to capture the political center was attacked from the rear by the People’s Party. A right-wing split may be part of the Liberal strategy in the next election.