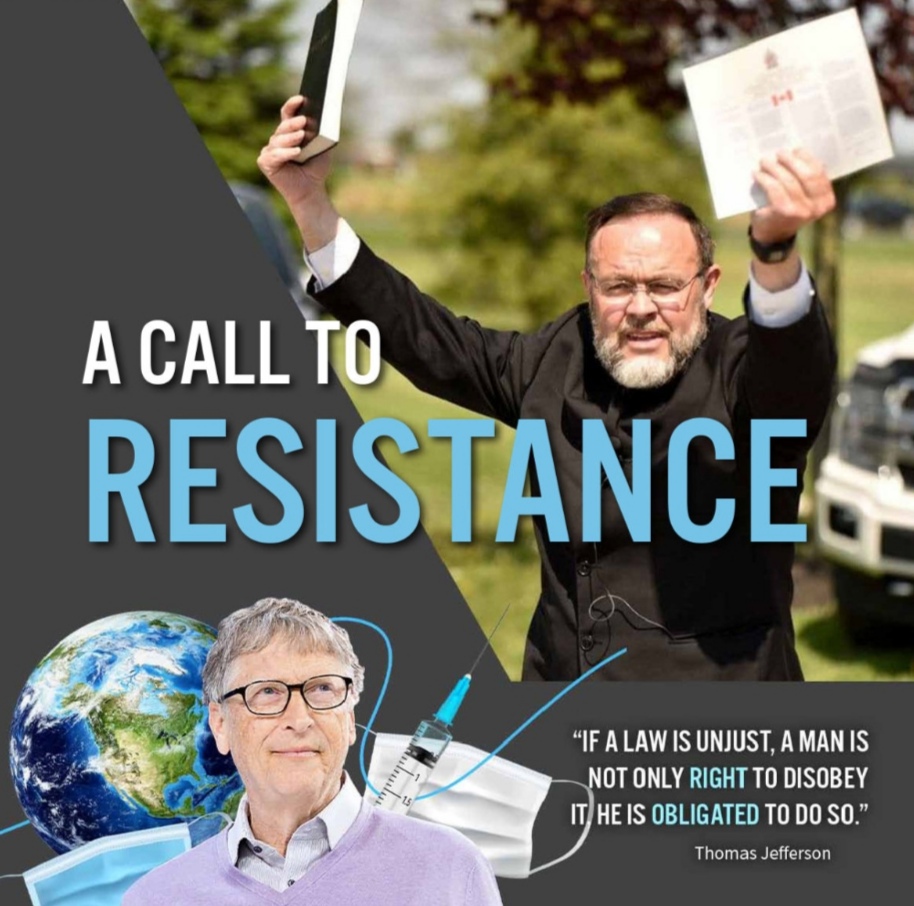 [ Part of The Canadian Far Right in the Time of COVID ]

Pastor Henry Hildebrandt of the Church of God, Aylmer is one of the foremost figures of The Line’s anti-lockdown protests in Toronto and Cornwall, ON. The Line (literally) platforms him as he sermonizes to their audience.

At these protests Hildebrandt speaks of God-given freedoms but otherwise focuses on the concerns of the general audience: government overreach, abuse of power, the duty to resist. His rhetoric blends perfectly with the anti-mask, anti-lockdown, and anti-vaccine ideologies. It provides them with a divine mission for their protests.

If we look to his home church in Aylmer, ON then it is easy to see why Hildebrandt preaches to this audience.

The Church of God (Restoration) is a highly-disciplined, anti-modern Christian sect. Doctors and medicine are strictly forbidden, corporal punishment is mandatory, and adherents separate themselves symbolically and literally from the outside world. The Church was founded by Daniel Layne in Aylmer, Ontario. Layne was described by former followers of being a totalitarian dictator. He described himself as a former addict who had left Skid Row to find God.

Daniel Layne then joined Church of God in California, but in 1989 left, due to the churches “liberal” teachings. He then started his own church in Aylmer, Ontario Canada. Layne met Peter, Henry and David Hildebrandt, Mexican Mennonites also once associated with the Church of God movement and like Layne they too believed it had become too “liberal.” Peter Hilderbrandt, now pastor of a church in Chihuahua, Mexico said, “We [knew] a lot of the bible, but no one seemed to be living it… [Daniel Layne’s church] showed with their lives that they lived the bible teaching.”

The Church of God describes Layne as a Prophet, a successor of Enoch.

God has always had leading figures of faith who were more prominent in fulfilling His purposes, whether it be a Paul, Menno Simon, or John Wesley. We view these chosen vessels at their allotted times in the gospel day. Permit us now to bring to view another of heaven’s selected vessels—Bro. Daniel W. Layne.

In that article the Church describes the earlier Church of God (which Layne had left before starting his own) as the “Sixth Trumpet Ministry.” This refers to the seven trumpets sounded by angels in the Book of Revelation. Layne’s Restored Church of God teaches that these trumpets are accompanied by developments in the Church. Similar to dispensationalist beliefs, the Church is renewed in the historical eras marked by the Trumpets. While the earlier Church of God was the Church in the time of the Sixth Trumpet, Layne taught that his ordination as minister signalled the Seventh Trumpet:

Bro. Ostis B. Wilson, recognizing that the Lord had His hand upon Bro. Layne for a special work. him ordained to the ministry in 1984, despite opposition from some of their sleeping ministers. Satan, filled with wrath at hearing a cry at midnight that was awakening those whom he had put to sleep, stirred up opposition. The seventh trumpet had started sounding, widening the gulf between the wheat and the tares.

Church of God, “Breaking the Silence”

And so Layne’s Church of God (Restoration) teaches that we are currently living in the final period of the End Times, and that the only path to salvation is through Daniel Layne.

This is the man that Henry Hildebrandt and his brothers became involved with in 1990. They have their own unusual path to the prophetic life. On July 17, 2001 the Toronto Star reported on Hildebrandt’s biography:

Rev. Harvey Elke, a minister of the German Church of God, says Hildebrandt was born into a German-speaking Mennonite community in Mexico and came to Canada in the mid 1980s. Hildebrandt was a member of his congregation in Mexico, says Elke. “I knew him well and helped him to organize the necessary papers to bring him and his family to Canada.” Elke returned to Canada in 1983 to work as minister in the German Church of God in Hamilton, a position he held until 1989. Hildebrandt and his family arrived shortly after Elke’s return. The Hildebrandts remained residents of Hamilton and attended Elke’s church until at least 1989 when they left the church and moved to Aylmer.

In Aylmer, Hildebrandt met Daniel Layne, a minister from the U.S. Layne says he ordained Hildebrandt as a minister in Layne’s Church of God. The two formed the Aylmer congregation of the church which has branches in Mexico, Germany, Africa and Russia. World-wide membership is between 1,000 and 3,000.

“You can tell who they (Hildebrandt’s breakaway church) are by their uniforms,” says Abe Harms. “They are an exclusive group. They keep to themselves and are not a part of the ministerial community.” Harms is the director of the Aylmer office of the Mennonite Central Committee, an umbrella organization of over a dozen Mennonite groups across Canada. He says that although many of the members of the Church of God in Aylmer have a Mennonite background, Layne’s church does not.

His sole comfort comes from the Church of God. Its 200-strong congregation is made up largely of former Mennonites who speak Low German and have immigrated to Canada from Mexico over the past 10 years.

And so this community of Mennonites came north with the Hildebrandt family to prepare for the end of the world.

Henry Hildebrandt was one of the founders of the Aylmer Church in 1990. He would be pastor of the Church in 2001 when it first gained notoriety.

On July 10, 2001 seven children were taken into protective custody by Child and Family Services. The parents had been accused of disciplining their children by striking them with blunt objects, in line with the Church’s position on corporal punishment. These accusations (and others) had come from former members of the Church.

Former member Pauletta Willis, whose brother Ray Tinsman has since become “Chief Apostle” of the Church, “recalls a childhood where she would be whipped with a belt until her skin would split and her flesh would welt. Her friend, she says, was once beaten with a two-by-four.”

In the midst of the scandal Hildebrandt sent dozens of children out of the country and into hiding with other branches of the Church:

When a second family in the church was investigated, Aylmer minister and former Hamilton resident Henry Hildebrandt worked with Ray Tinsman’s church in Dayton, Ohio, to ship about 75 children and their mothers south. Ray, his father Jerry Sr. and preacher Jerry Jr. are hiding families in their rural Farmland homes.

After the flight to Ohio, sources told the Hamilton Spectator that the children may be moved further south, to Mexico.

The Church of God’s legal defense was that their religious beliefs demanded corporal punishment and that their beliefs were protected by the Constitution. Their implements included “a broken metal fly swatter described as the ‘spanking stick.’“. The Church lost the case in 2002 and their appeal was rejected on first sight.

In that same year, Henry refused to cooperate with police as they investigated the death of his newborn niece:

Manitoba officials say Amanda’s mother, Judy Hildebrandt, went into labour prematurely in June, but she and her husband — Henry’s brother, David — refused to go to hospital.

The Hildebrandts stayed home even though their midwife insisted they seek medical care, said Johanna Abbott, director of the chief medical examiner’s office in Manitoba.

An exclusive religious group, distrustful of the outside world. An opposition to medicine that it is so strong they are willing to let their children die. A scriptural basis for horrific child abuse. A challenge to the court based on “God-given” rights and freedoms. All of these elements have re-emerged as part of The Line Canada’s anti-lockdown movement.

The Church of God rejects “man-rule” and considers the Bible to be the only source of Law. Hildebrandt focuses so much attention on the Charter because he believes that its Fundamental Freedoms clause means that the Church is exempt from the laws of Canada.

While one might expect the pastor to try and keep public attention off of his scandal-stricken congregation, Hildebrandt has preferred to stir up controversy and stage publicity stunts:

An Ontario pastor who finds himself at the centre of a national controversy over the spanking of children says he was not the source of illegal photographs that appeared on the Internet.

“No sir, it wasn’t me,” said Rev. Henry Hildebrandt, who has been charged under the Child and Family Services Act after photographs of children seized by child-welfare officials appeared on a Christian-based Web site.

It is illegal to identify children who are part of a child-welfare proceeding.

Hildebrandt was charged by Aylmer police after a post featuring the children’s pictures appeared on a friendly website:

The anti-lockdown protests are the largest manifestation of anti-medical ideologies in recent memory. They present specialists like Hildebrandt a special opportunity to reach a new audience. It appears that he is treating the protests as a recruiting drive for the Church:

Some former church members and observers say the answers can be found in a church still clinging to its doctrines, but trying to expand and gain attention — amid a pandemic that’s also fuelling the effort.

The doctrine governing Church of God congregations always has resisted modern medicine, to the point some members in the U.S. have died, they point out. The church and its leadership, especially Hildebrandt, always have sought publicity to gain followers, they say.

But that desire to gain followers has prompted the church to open its doors and abandon some of its principles, they contend.

“They have been prophesizing for years that in the end time, there’s going to be an influx of people coming into the church by the thousands or by the millions,” said former Indiana Church of God member Adam Pamer.

To make that happen, they’ve opened the door so wide now they’re attracting a collection of militant anti-government protesters, he says.

On January 21, 2021 the Redemption Bible Chapel of nearby London, ON also accused Hildebrandt of seeking publicity. They gave some description of the Church’s political structure. They call Ray Tinsman heretical for saying that the leaders of the Church can write new scriptures. They characterize the apocalyptic nature of the Church in writing that “Layne taught that he was an angel of God, prophesized about in the book of Revelation.”

It remains to be seen whether or not Hildebrandt’s strategy with The Line will pay off with an enlarged Church. If it does, one can be sure that the influx of right-wing conspirators, new age hippies, and homeopathic grifters will make it a strange congregation for the stranger times ahead of us all.

View all posts by Lark O'Dell