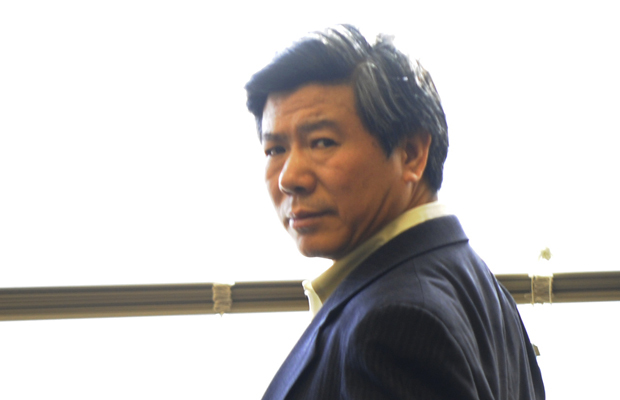 In 2009 Kyaw Myint gave a biographical interview (as Michael Hua Hu) to the Vancouver Sun. There he revealed that he was a Communist Party of Burma member until the 1989 coup and dissolution of the party. Thereafter he became a leader of the local remnant of the CPB, the United Wa State Party and Army. The Sun’s investigation turned up a hidden story: that Kyaw Myint entered the drug trade after the CPB split, funding the Wa separatist movement with the proceeds.

Two years after this interview Michael Kyaw Myint was convicted of securities fraud in British Columbia. Within two years of his conviction Michael was back in Myanmar to lead the party he had founded in exile in 2010, the UDP.

In 2017 The Irawaddy echoed this material and built on it, elaborating on how his Canadian ventures had funded his return to Myanmar:

Since slipping back into Myanmar from China in 2013, Michael  Kyaw Myint has bought several buildings and land plots in Yangon, Naypyitaw and Pyin Oo Lwin. A government spokesman said at a press briefing last week that, “He was able to save 33 million Canadian dollars [32.42 billion kyats] in bank accounts at CBC Bank, RDC Bank and TD Bank. After withdrawing all the cash, he took 18 million [Canadian dollars] and shared the remaining 15 million with his family.”

Michael Kyaw Myint, a.k.a Michael Hua, married the youngest daughter of Zau Mai, an ethnic Kachin who had initially been with the Communist Party of Burma (CPB). When the CPB faced a serious mutiny in 1989, Zau Mai joined the United Wa State Army (UWSA), where he became a high-ranking officer.

The Irawaddy alleges that Michael Kyaw Myint escaped prison by bribing the guards. He allegedly gained passage to America by selling information to the DEA in Thailand. In 2002 he gained refuge in Canada, where he began to raise funds for his return to Myanmar.

The report describes how he was chosen to be the head of the UWSA’s drug business:

Wa leaders who reached a ceasefire agreement with the then powerful Military Intelligence department in the 1990s were allowed to engage in businesses including drug trafficking in Myanmar. But they needed someone based in Yangon.

It appears that he was charged with money laundering in relation to the drug trade, landed him in the prison from which he would escape:

In November 1998, Jane’s Intelligence Review reported that Michael Kyaw Myint, who claimed to be a deputy minister of finance for the UWSA, flouted Myanmar’s business laws. Myanmar Kyone Yeom was outlawed by the Myanmar Investment Commission and Michael Kyaw Myint was given a 10-year prison sentence.

Throughout these reports there are accusations of Michael Kyaw Myint working with Chinese nationals, “ethnic Chinese drug traffickers,” and “Triads”:

The government spokesman said Myanmar Kyaw Investment Group Co. Ltd. illegally received 16.315 billion kyats (about US$12.5 million) in 2015 via money transfer services operating on the Chinese border in Muse, Shan State, adding that the cash transfers were made by Chinese citizens in Ruili and Jiegao engaged in illegal money transfer services.

The Irawaddy is one of several outlets I have found to have implied the People’s Republic of China is behind Michael:

He remains close to his former business associates, the Wa and the Chinese mafia. Pro-NLD sources accuse him of being a Chinese spy but there is no proof of this. However, Michael Kyaw Myint held a high-profile meeting with China’s then ambassador to Myanmar, Yang Houlan, in December 2013.

The next part of this story will investigate the ties between the United Wa State Party and the People’s Republic of China.

View all posts by Norene Weaver